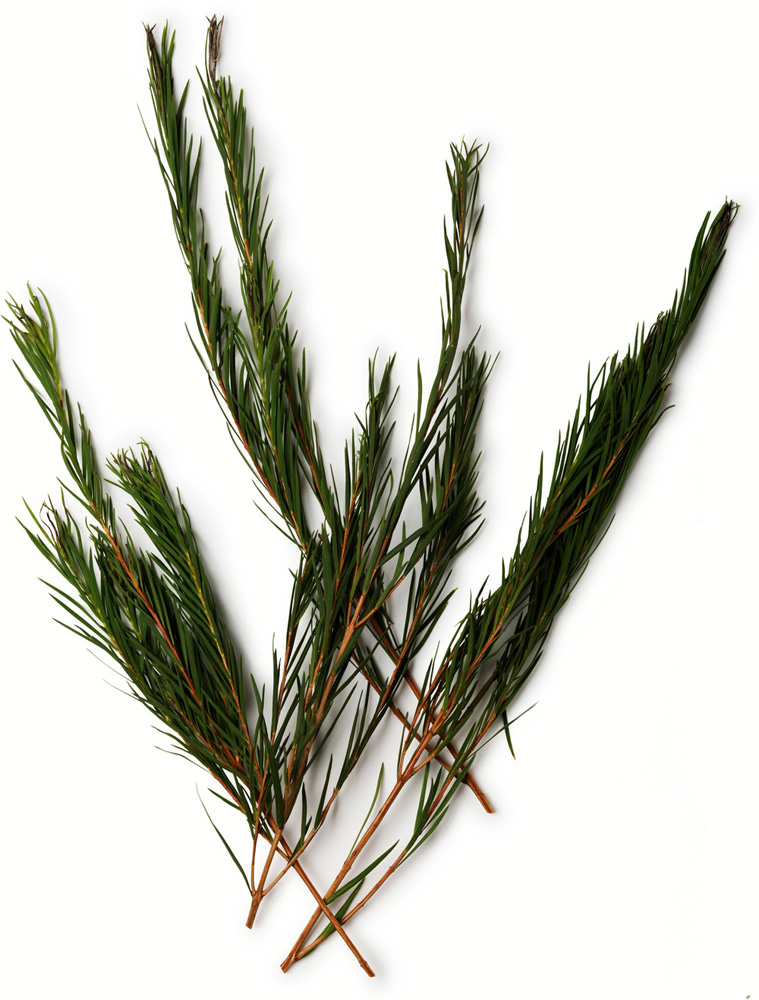 Clarify your skin and hair

Tea tree (Melaleuca alternifolia) is a small tree belonging to the myrtle (Myrtaceae) family and it is native to Australasia.

It is thought that the taxonomical name melaleuca was given after the tree's trunk had been charred black by a bushfire. Melaleuca is derived from the Greek 'melas' (meaning black) and 'leucos' (meaning white). The tree's trunk, branches and flowers are actually white - and it is known as one of the so-called paperbark trees because its bark peels back in paper-like layers.

The common name is accredited to the British explorer Captain Cook who is reported to have boiled the leaves into a tea-like drink, which he gave to his men in the hope that it would prevent scurvy.

The aboriginal tribes had been using the leaves of this plant as a medicinal tea and traditional remedy for years. The foliage contains an abundance of aromatic essential oils. Some of the paperbark varieties are exploited commercially for the high germicidal value of the leaves and oil extracted from them.

The bark has been used for roofing, corking ships, and for lining baskets. Aboriginal women are said to have traditionally used this bark to wrap their children in, which acted as a kind of antiseptic protection against chills and bacteria.

Tea tree leaves are collected and steam-distilled locally. The oil smells warm, spicy, and fresh. The leaves that yield tea tree oil are themselves useful for keeping hair and skin clear and blemish-free.

Tea tree oil is made up of around 100 substances, including terpenes, mostly considered to be responsible for tea tree oil's reputation as a remedy. The oil has been scientifically proven to be antibacterial, antifungal and particularly effective against the types of fungi we call yeasts.

We make tea tree water by dispersing tea tree oil in water. We use it for its clarifying action.

Tea Tree Water can be found in these products

Tea Tree Water
Toner Water
A powerful spot-zapper
HK$190.00
/
250g
0.00 (0)
Cancel
Back
Choose your knot wrap Confirm knot wrap design
Accept Cookies
Fancy a Chat?
In order to speak with one of our team, please accept Olark cookies and we will be happy to help!